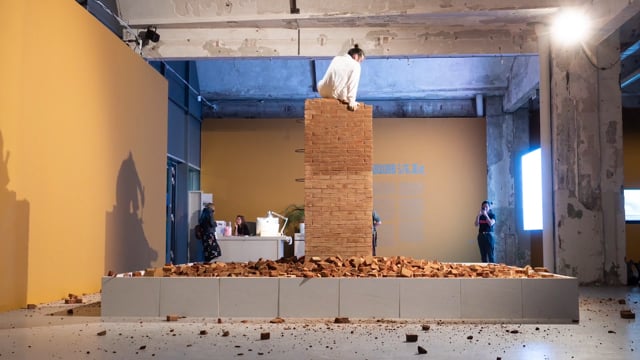 The performances and videos of Li Binyuan (1985) bring about a sense of catharsis. Whether he stands within an inch of a rapidly rotating, man-sized circular saw, or holds up a board against a thundering waterfall for several minutes, in the end something essential has changed. Something was accomplished. Hidden behind his exhausting, apparently pointless actions are personal emotions and contemplations, a yearning to connect with an environment and a society where he, as an artist and individual, remains a strange phenomenon.

In the works he shows in MU, Li Binyuan often measures himself against the water; element of recovery, of uncontrollable violence, of rhythm, transformation and reflection. With each performance, carefully thought out or created spontaneously on his travels, he stages a universal experience. A necessity. You don’t need to understand the contemporary Chinese context to know: this is someone doing what he has to do.