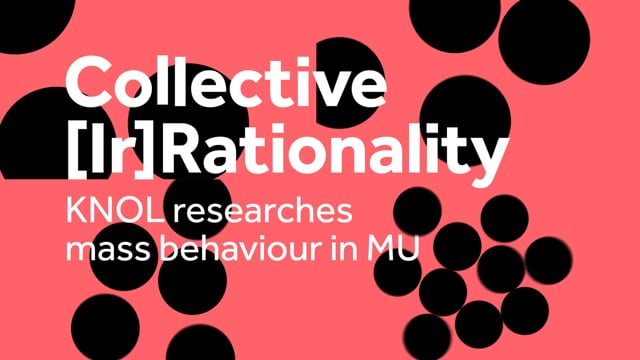 Just Follow The Crowd! During Dutch Design Week 2015, hundreds of thousands of people visit Eindhoven to see the latest developments in design. They move from one location to the next in droves, they eat in restaurants created for the occasion and wait in line for the design rides. What is it that makes so many individuals, who are genuinely interested in originality and authenticity, all follow each other and tell each other where it’s at and where it isn’t and what they really shouldn’t miss? Especially for MU, visited by over 36,000 people in nine days during last year’s DDW, Studio KNOL will create a spatial installation to research this collective (ir)rationality.

Studio KNOL specialises in constructing spatial narratives: for their conceptual designs they literally build parallel worlds to draw attention to current developments within society and to make them more tangible. Their installations are carefully designed research projects with a fictitious character, allowing ample room for alternative interpretations. In the past few years, they collaborated with MU several times.

For Collective (Ir)rationalities, Studio KNOL will transform MU’s space into a landscape where the rules of mass behaviour can be researched and experienced. The most striking thing about complex group behaviour is that it often comes about without overall co-ordination, simply because individual members of the crowd directly respond to those around them. The fantastic patterns of a flock of sparrows for instance or the incomprehensibly abrupt movements of a school of herring can be caught in three basic rules: follow the same direction, avoid collisions, stay together. But how these fish instantaneously know where the others are swimming and which way they turn, remains a mystery.

And what about people? Do we consciously or unconsciously follow collective rules? Are we being guided by some ‘invisible hand’ like the one that, according to Adam Smith, brings together supply and demand? Is our behaviour influenced by the room we are in or doesn’t it affect us at all? To what extend can our mass behaviour be traced back to individual decisions? In short: what moves us to collective (ir)rationality?

So, for all those people who will be walking around at the DDW wondering where it’s at: Studio KNOL at MU, Strijp-S. You can’t miss it, Just Follow The Crowd!
Follow MU online during the DDW via #ddw15 #justfollowthecrowd #createoutloud

Follow MU on social media during the DDW via Get the Buzz and #mupress #justfollowthecrowd & #createoutloud
Check our MU Play&Learn educational program for this exhibition here
Images: HeyHeydeHaas

MUtate No.3 KNOL | Out of Office