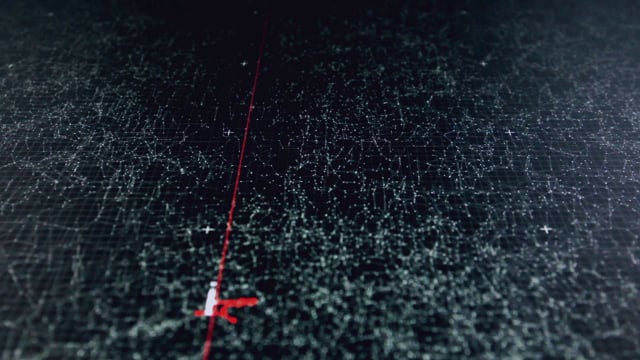 Ryoji Ikeda (Gifu, 1966) is one of Japan’s leading composers of electronic music and visual artists. His work is focused on the essential characteristics of sound, light and data. Ikeda has gained himself a reputation as one of the few international artists who works convincingly with both visual and sonic media. He elaborately orchestrates sound, visuals, materials, physical phenomena and mathematical notions into immersive live performances and installations.

After presentations in New York, Bogotá and Montreal MU will show Ikeda's data.scan [nº1-9] for the first time in Europe, starting February 1. data.scan [nº1-9] is part of Ryoji Ikeda's ongoing datamatics project, which he began in 2006. In this project he explores the potential of perceiving the invisible multi-substance of data that permeates our world materialising pure data into image and sound in all manner of ways.


data.scan [nº1-9] is an audiovisual installation composed of a combination of pure mathematics and the ocean of data generated in this world. Every single pixel of the visual image is calculated on the basis of strict mathematical principles. Elaborately composed microscopic visualisations are shown on nine display columns, and are all accurately synchronised with the minimalist soundtrack. Visitors to the exhibition will experience the vast universe of data, while walking through the grid formation of the works.

The data.scan [nº1-9] presentation at MU is also meant as an upbeat for the première of Ikeda's spectacular new immersive multimedia performance Superposition which can be seen on Friday, March 8, and Saturday, March 9 during, during the STRP Biennial at the Klokgebouw, Strijp S. For more info and tickets please go to www.strp.nl.

Opening and New year’s drink on Friday February 1 from 20.00h.