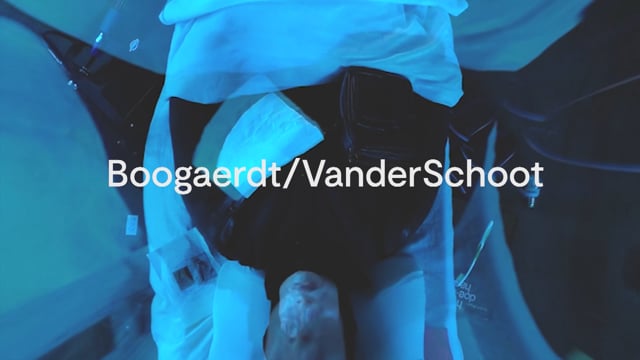 Sleeping is an elusive activity in which reality and reason are abandoned. Could we see the associative stream of images that proceeds in our subconscious at night as a source of wisdom? According to performance duo Boogaerdt/VanderSchoot, it might be the key to a next step in the transformation process of man and her place on this earth.

Boogaerdt/VanderSchoot seeks the answers in the collective subconscious that reveals itself in a visual language when we sleep. Enter the dormitory, step out of the tangible world and go on a ritual inward journey to a dreamed reality.

Fremdkörper is inspired by the sleep temples of the Ancient Greeks. At the time of Parmenides and Pythagoras, about 2500 years ago, philosophers, guided by a priest(ess), gathered wisdom from their subconscious during sleep. The knowledge gained from this incubation practice was considered the basis of society.

Western science has its origins in the (dream) oracle. It is based on a forgotten world view consisting of a mixture of disordered and ordered patterns. Divination - a form of soothsaying - and science were once equivalent, and derive from the same source. What was still a unified whole 2000 years ago, has fallen apart into two extremes.

Can we reuse these ancient rituals to find a balance again between body and spirit, heaven and earth, inside and outside? To think of mankind no longer as the final goal and summit of evolution, but to search for a new form of co-existence. Away from the old patriarchal society and in harmony with the world around us.

By day, you can visit Fremdkörper as an installation. Due to the COVID-19 measures we close daily at 17.00.