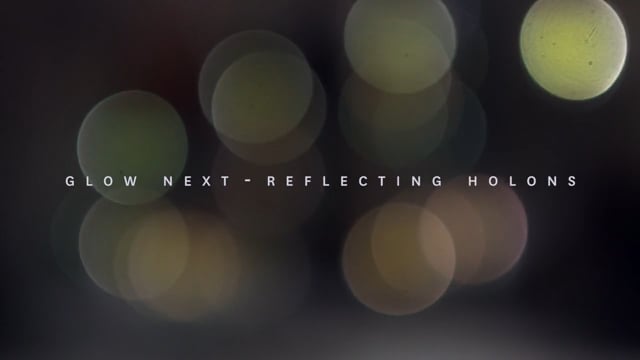 Stable and fragile at the same time, a node between part and whole: the Holons invented by Jetske Visser and Michiel Martens capture the essence of our existence in one fluent movement during GLOW NEXT 2015.

A Holon might best be described as a soap bubble you don’t have to blow yourself. Razor-thin iridescent strips attached to a rotating axis create the illusion of a spherical form that breaks and disperses the surrounding light just like a soap bubble would: revealing all the colours of the rainbow. But where soap bubbles tend to burst after a brief flight, the Holons are driven by simple electro-motors that sustain them without effort. The moment of marvel seems to go on for ever as MU’s exhibition space becomes submerged in the magic of these autonomous creatures.

Discovered accidentally during experiments with reflecting materials, the Holons interweave a childlike fascination with aesthetic exaltation. Visit MU and get enchanted by their play of light and motion that celebrates life in a dance with the night.