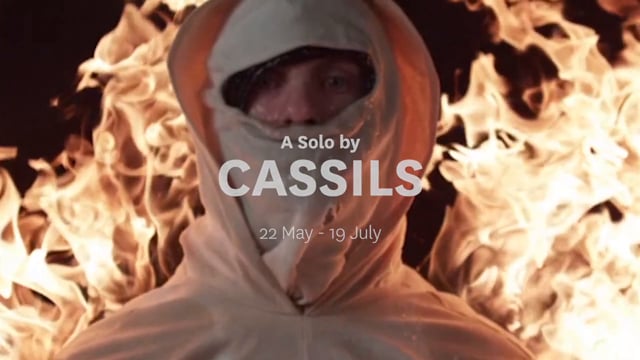 Opening night will feature a live performance of Becoming An Image. Here the artist and photographer are plunged into darkness. When the photographer uses his flash, a burst of temporary light allows the audience to see only suspended moments of the performance, much like a “live” photograph, burning this image into their retina.  A sculpture bearing the markings of this violent attack will be on display for the duration of the exhibition. As will Ghost, a multi channel sound track of sharp breaths and wet punches recorded from a prior performance.

Inextinguishable Fire, Cassils newest piece, is a performance for the camera, featuring Cassils engaged in a treacherous fire stunt. The final film makes the stunt’s theatrics as visible as its ostensible risk. Using techniques borrowed from Hollywood stunts, Cassils experiences the very real human terror of being lit on fire.

Another work in the exhibition is Cuts a Traditional Sculpture, a series of large-scale photographs documenting Cassils 23 weeks of muscle gain (paying direct homage to Eleanor Antin’s famous body nullifying work Carving a Traditional Sculpture).
Also on view is a video projection of Teresias, named after the prophet of Greek mythology who transformed into a woman for seven years. A fifteen-minute distillation of a four-hour performance is projected of the artist pressing themselves up behind a voluptuous male torso, sculpted from ice, which melts away. In this piece Cassils is not just burning away the mantel of Teresias, they are absorbing it as well.

Sideprogramm
20 May Design Debate on perfect humans with Cassils and Marli Huijer at Design Academy
17 June Incendiary day, with panel and performance at MU
www.heathercassils.com