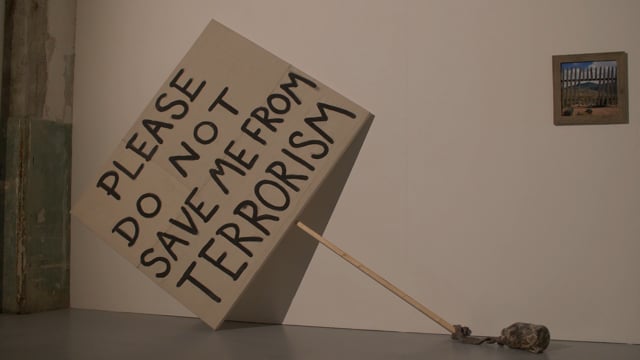 We are living in interesting times – and what a mixed blessing it is! The optimism that swept across the western world after the fall of the Berlin Wall has been replaced by bewilderment. ‘What the [beep/fuck/f**k] is happening?!’ would sum it up nicely. In a response to political turmoil and the return of History as we know it, American artist Brad Downey shifts his attention from the street to the state. Reverse Culture Shock, at MU from Friday 2 March to Sunday 29 April, is his most engaged exhibition to date because, as he says, sometimes poetry is not enough.

Notorious for his subversive pranks and minimalist interventions in public space, Downey has used the streets as his studio for years. Ash trays, lampposts, flower pots, traffic signs, tiles, bicycles, phone booths, benches, trash bins, demarcation lines – anything can become a work of art overnight if you look past its fixed, inevitable function. His art has always been an invitation for people to make a change and the works he is now showing in MU are no exception. Their scope however, is no longer the same.

Take The Non-Objective World for example. In 2013, Downey paired a shopping cart to a city bike for a project in Prague; the result could be read as a comment on the commercial motives of city bike schemes or just a hilarious way to repurpose ‘free’ materials but it was not profoundly political. Today, he is mounting a model of Tatlin’s Tower on top of a tank in reference to the Russian annexation of Crimea and Moscow’s continuous meddling in the eastern Ukraine.

The futuristic tower, designed in 1919 by Ukrainian-Russian architect Vladimir Tatlin as a monument for the Third Communist International, symbolised the optimism and aspirations of the early revolution. It was never built however, and the hope it represented was soon lost when Communism became synonymous for state control. In that sense, the work also refers to the Hungarian uprising in 1956 that ended with Russian tanks in the streets of Budapest. Downey plans to drive the ‘Tatlin tank' to the Ukraine – to bring the message home.

Something similar is happening with Fence Hacks Five, a number of works from 2014/5, for which the artist cut four boards from a picket fence to form an opening, using the wood to frame a picture of the result. Showing a barrier at the US-Mexican border that received the same treatment in 2017, obviously gives the work a whole new significance. We also get a better idea of what Downey means with the exhibition title. To him, having lived in London and Berlin for many years, the America that elected Donald Trump has changed beyond recognition. And let’s not turn a blind eye to the isolationist tendencies in Europe like Brexit or the Ankara refugee deal.

Reverse Culture Shock becomes more intricate with My Mind Always Drifts, a series of magazines and posters Downey collected in Turkey and the United Arab Emirates for the censored images they contain. Anything indecent is blocked out by staff of the National Media Council. The images inspired a fashion collection made especially for the exhibition in collaboration with Jess Oberlin. The creations will be presented regularly during the exhibition in, a fashion show that coincides with the five daily Islamic prayers.

For Downey, who often travels and works in Muslim countries, the collection is a way to turn censorship and oppression into something empowering. At the same time, it is hard not to think of the thinly veiled islamophobia of Trump’s travel ban or the virulent anti-immigration rhetoric heard across Europe. Yes, it’s personal: isn’t that why we care in the first place?

If, however, politics is not your cup of tea, you can still enjoy Reverse Culture Shock for its poetry and its thoughtful observations disguised as humoristic statements. Treading, a video from 2015, of a dog walking on a treadmill in the streets of Kazan, becomes a monument for the mindless. This dog is a good-natured animal, large, docile, that appears to enjoy the exercise and hardly notices its environment – just like passers-by tend to ignore the dog. [Disclaimer: no dogs were harmed in the making of this video.]

Impossible to miss are the crickets chirping in the exhibition space. Just the males though: they are the ones making all the noise, scraping one wing across the other to attract a female cricket or to scare off their rivals. As if a few hundred crickets aren’t loud enough, Downey bugs their terrarium and amplifies the recording. Proverb about Machines might reflect on anything from social media to machismo or the human condition. Aren’t we all just trying to be heard in an increasingly crowded world? And what do we have to say?

Another new work that’s loud and clear is Teach me to Forget, a tall stack of steel cylinders that comes crashing down randomly, only to resurrect itself like a push-button toy, over and over again. Everything inevitably collapses at one point or another and the title seems to suggest that we are bound to repeat our mistakes, but at the same time the work is a reminder that nature, man, democracy, civilisation – or whatever it is the tower stands for – is far more resilient than we might think. [Soundtrack: the 1997 Chumbawamba song ‘Tubthumping’: I get knocked down, but I get up again; You're never gonna keep me down.] This is not a pessimistic exhibition; it’s a call to arms. Control, ownership and our ability to change the established order have always been part of Downey’s work. In MU he cranks up the volume.

Specials
Saturday 3 March 11:00 AM - 8:09 PM
The first Saturday after the official opening MU will be open until 8:09 PM with a special evening opening. The fashion show 'My Mind Always Drifts' will be held at the following time slots:

The fashion show will only last a few minutes on Saturday and will show another piece of clothing every time.