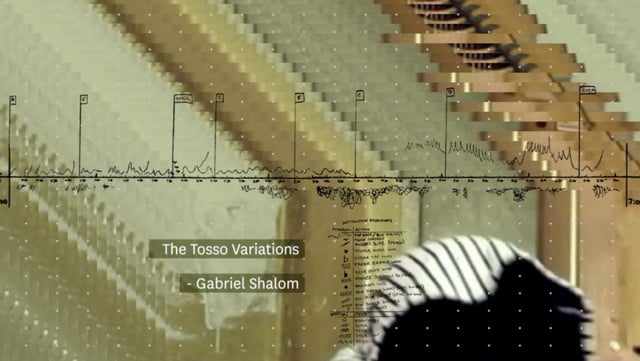 The Tosso Variations by Gabriel Shalom

For 'The Tosso Variations' he has recorded several free improvisations by the Japanese musician Shingo Inao. Inao plays his Tosso, a six-stringed sensor instrument of his own design, which reminds of the cello. Inao knows how to play the instrument warmly and sensitively, but he can also make it growl and scream. Each improvisation is performed with Inao dressed in a different outfit. This series of pullovers are from 'The Story of Oswald 1848' – a collection created by fashion designer Nicole Roscher for her label Von Bardonitz.

Shalom transforms these improvisations into five audiovisual movements. In this exhibition, Shalom's five movements are presented as a multi-channel video installation. The distribution of the audiovisual content throughout the exhibition space expands our sense of the space in which the source material was recorded.

On the opening night of The Tosso Variations, MU will also present the première of Timeless, a video essay / design fiction produced by KS12.

On Friday February 24 Gabriel Shalom will give a masterclass and we will organize a screening with Q&A around Timeless. read more

The Tosso Variations by Gabriel Shalom