During the opening of Body of Matter

An essay by / interview with Agi Haines

Q: Agi, your work, what is it? It looks like a giant floating brain!
Agi: Well actually that is kind of what it is! It is a Drone that is working through my brain data in order to learn to move.

Q: A ha so it is in fact a self-portrait?
Agi: In a way it is, but as it learns it will become a more and more distant likeness to myself. So as we created an artificial neural network based on my brain data this network develops over time, so as it creates a comprehension of its surroundings its neural network will change, just as the plasticity in the brain does. It then becomes slightly more like a clone that develops with different external pressures.

Q: Jos/Marcel do you feel this drone is a self-portrait of Agi?
Jos: Yes, I can definitely feel as though I can imagine similarities!

Q: So and, does it look like Agi? Does it behave like Agi?
Marcel: As we use the brain for movement, this machine replicates a sort of synthetic nervous system but the basis is the anatomical structure of Agi’s brain so the network of the brain in the machine looks like the anatomy of Agi’s brain. But within a different body it is interesting to make a comparison as to whether the behaviors have some sort of resemblance.

Q: What did you tell her about about the brain? Was she a good student?
Marcel: Yes! She was a good student. I feel as though if you questioned her now in comparison to the beginning she is much more knowledgeable about neuroscience.

Jos: But her thoughts wandered in every direction, she was consistently asking many questions and coming up with different ideas, we had to pull her back to earth from time to time.

Q: What do you mean? How did Agi react to scientific facts? Did it get her imagination running? Did she start asking philosophical questions?
Agi: Not only the scientific facts were sources of inspiration to make the art work. Over the course of the project we had to learn about and incorporate lots of different aspects, not only neuroscience and anatomy, but also robotics, computing and sound design, so we had to undertake a lot of crash courses in different disciplines in order to realize the work. This came not only from Marcel and Jos but also the other collaborators Sean Clarke, Jack McKay Fletcher, Christos Melidis and Vaibhav Tyagi, who are all from very different backgrounds.

Q: How do you refer to it, as a he or a she? Did it get names?
Marcel: It is a she, as it is a version of Agi, it is based on a female brain. Although throughout the project we had many nicknames for it like the Giant blob or the Agi2.zero.

Agi: Although none of these really stuck, I prefer to refer to it as ‘The Drone’ because of the underlying meaning of the word and its use in relation to the work, being a representation of a tool used for thought and action. But like most artists and their work it is hard to not become attached and give it a name like ‘The Blob’.

Q: So it has some of her character?
Marcel: Well I think the more you watch it the easier it is to project characteristics upon it regarding its decision-making processes, whether it is or not you being to speculate about the similarities between both the original and the replication, which must be an affect of the modeling. 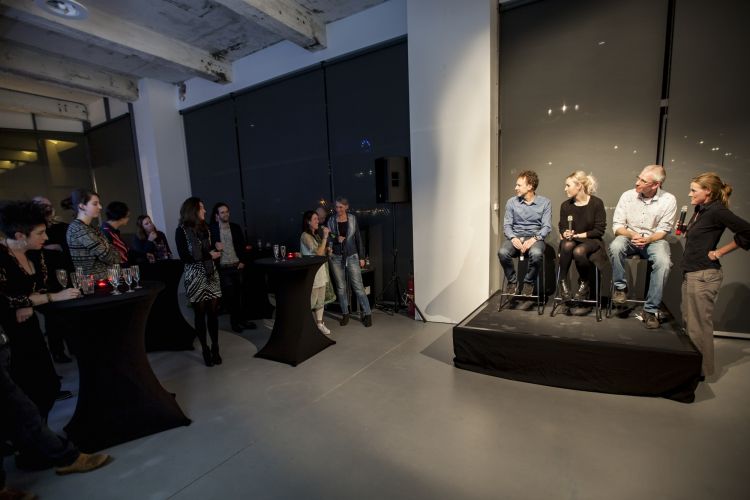 Q: Would the drone behave differently if it were based on your brain activity?
Marcel: For a start it would be a male brain! But the brain network is still just a representation so is not, of course, an exact replica of the brain but this kind of modeling is often used and has given an amazing indication of human learning behaviors both anatomically and robotically. The translation of data from different brains would definitely differ between subjects but without testing it may be hard to see a difference in behavioral output.

Q: Agi, what will your next work of art look like?
Agi: This project is still a work in progress and I hope we may be able to gain more from it now we can test it to see how the network changes over time. I would really like to learn something about modification of the brain from this artwork which may inspire new works.

Q: Marcel, what did you learn from her?
Marcel: Well that’s a tough question, but I think what was highlighted was that neuroscience is extremely specialized and sometimes we should be pushed out of the comfort zone to get a broader view, which is an important thing. Every once in a while it is good to stretch boundaries and raise alternative questions.

Q: Will machines develop their own will?
Jos: If we could use technology such as this to eventually develop an exact replication of the human brain it is still difficult to say if they may have free will especially if their decisions could still be monitored or controlled as part of a program. But it does become scary when you think self-driving cars, may have ulterior motives and want to go to the beach, or cinema…those examples would be obviously be positive, but some other decisions might not be! What might their desires be? I can imagine that now. Machines with desires.

Being human in the age of loss

Essay commissioned by MU Hybrid Art House for the exhibition‘Polarities: the psychology and politics of being ecological’ IntroductionThe first time I encountered overwhelming feelings of sadness, mixed with powerlessness and anger related to something other than human loss ... More

‘Free will is overrated. I do not make decisions outside the Universe and then plunge in, like an Olympic diver. I am already in. I am like a mermaid, constantly pulled and pulling, pushed and pushing, flicked and flicking, turned ... More

Civilization is often regarded as a process of transforming raw material – what is found in nature – into culture and its accoutrements, from cities and musical scores, to cuisine and the rule of law. But of course, each ... More

Proposing a Dogme 95 Approach of Journalism

Artists, architects, theatre makers, musicians, they all can perform the act of journalism just as well as – and maybe better than – the ‘real’ journalists. Take for example Forensic Architecture, a London-based multidisciplinary collective with art exhibitions all ... More