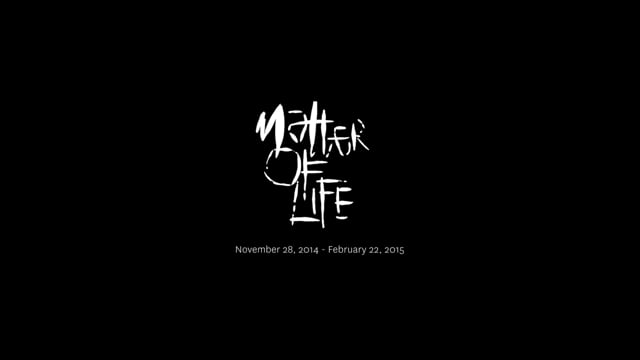 Pigeons, fungi, human cells, finches and flowers are just some of the mediums of bioart and design. These emerging fields are the source of daring experiments and thoughtful reflections about how aspects of culture, such as our concepts of identity, nature and environment are changing.
In Matter of Life, MU and guest curator William Myers present nine such research projects at the intersection of art, design and the life sciences. The participants include the three winners of the Bio Art and Design Award for 2014, as well as artists and designers at the forefront of this developing discipline that merges the techniques and intentions of laboratories and studios, echoing an earlier epoch in which the arts and sciences were more closely entwined but also looking to a future characterized by disruptive biotechnologies.

The exhibition offer views of a line of cells from the brain of a zebra finch, the proliferating cancer cells of an otherwise healthy artist and genetically modified blue carnations that are allowed to take part in evolution once again through a new form of bio-piracy. Visitors are witness to the creation of a real FATBERG, offered samples of barbecue sauce made from plants mutated by radiation and presented with sprays that allow them to delete or obfuscate their DNA traces at will.

With their curiosity, uninhibited creativity and critical reflection, artists Arne Hendriks & Mike Thompson, Jalila Essaïdi, Charlotte Jarvis, the Center for Genomic Gastronomy, BCL and Heather Dewey-Hagborg are making bioart and design an exciting and timely form of the moment.

Among this group are participants and winners from the Designers and Artists 4 Genomics Award, the previous name for the Bio Art and Design Award. This award granted three teams €25.000 each to materialize their proposals in close collaboration with leading Dutch research centers. The results of these projects are being presented in MU as a part of Matter of Life. Studio PSK intervenes in evolution to create a new messenger pigeon with The Economics of Evolution: The Perfect Pigeon; with Fungi Mutarium, Julia Kaisinger and Katharina Unger give us edible fungi you can grow at home on toxic plastics; and with Naval Gazing, Špela PetriÄ introduces new maritime habitons to the sea, where the cultures of people, plants, fish and crustaceans meet.

What connects the diverse and complex works being shown in MU is a sense of urgency. Each project invokes penetrating questions about who we are as humans, as living beings and where the developments in the life sciences are leading us.