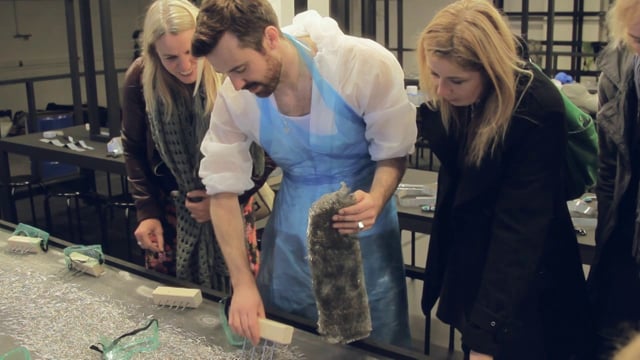 Since his graduation from the Design Academy in 2007, designer Bart Hess has made a name for himself in the world of international fashion, art and design. He is known for his much acclaimed cooperation with Nick Knight, Nowness, Lucy McRae and Lady Gaga. In his many-sided practice, he succeeds in uniting fashion, textile, design, photography and animation. His projects radiate an atmosphere of unworldliness and futurism. By means of an often extremely labour-intensive, manual production process he changes relatively commonplace materials into new skins for the humans of the future.

On the eve of his move to London, Bart Hess has accepted MU’s invitation to prepare a production line that will support him in the pre-manufacture of materials for some of his high-end clients. That, in this post-Fordian era so full of creative industries, this would be impossible without the obliging labour of many ‘voluntary' hands, is an aspect which he cheerfully, although not without irony, brings up for discussion.


During DDW 2012, Bart Hess will be looking for extra hands to bring his latest designs into being. Are you hardworking and amenable, then this could be the perfect job for you! As a process operator, you'll be working under the supervision of Bart Hess and his team on the realisation of a number of jobs. The core task is production in accordance with the specified requirements of quality and quantity. It is of paramount importance that corporate safety regulations and procedures are met at all times.

We conclude a week of hard work with a party on Sunday afternoon, October 28, from 4 pm onwards.